The Way To Willpower By Henry Hazlitt 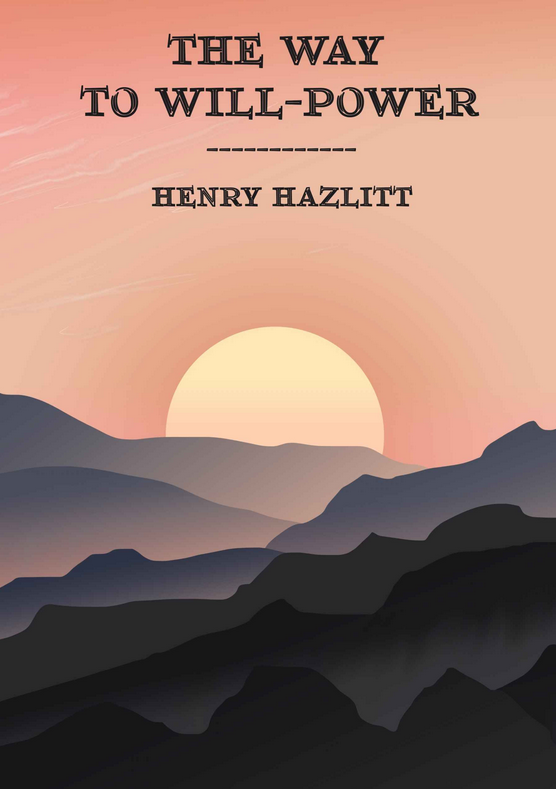 My rating: 8/10
The Way to WillPower was published in 1922, but still packs a ton of super valuable information relating to "will-power". I found many of its ideas useful in my everyday life. It's a relatively quick read, I definitely recommend!

My rating: 8/10
The Way to WillPower was published in 1922, but still packs a ton of super valuable information relating to "will-power". I found many of its ideas useful in my everyday life. It's a relatively quick read, I definitely recommend!

How The Book Changed Me

You would think that a goal of reading the book is to improve your will-power, and that’s definitely an effect that it had on me. I find that even just having the words to conceptualize will-power as the desire to be a certain character helps me resist “temptation”. I also find the “rules of will-power” to be very helpful:

Here i’ll list some ways my mindset changed after reading the book:

How I Discovered It

I discovered the book through Vasili who very kindly gifted it to me. Thank you!

Summary and Notes (By Chapter)

Introduces the idea that the will does not exist as another faculty alongside the memory, imagination, and a way to reason.

The Intellect as a Valet

Claims that the intellect is responsible for choosing between desires.

The Price One Pays

There is a price to be payed for valuing remote desires over present ones.

Old Bottles for the New Wine

The will may be defined as our desire to be a certain sort of character. If this desire is strong enough, it can assist your intellect to make decisions that value the future. Will-power may be defined as the ability to keep a remote desire so vividly in mind that immediate desires which interfere with it are not gratified.

It’s problematic that people make too many resolutions and then don’t keep them. Instead people should think long and hard about the prices associated with a resolution, and then only make them when they are confident that they can keep them. This helps avoid the demoralizing act of breaking one.

Success and the Capital S

Decide for yourself what “success” means; Don’t make the mistake of continually trying to obtain the things that the people around us want or profess to want, rather than what you want yourself, because you have never really tried to examine whether there is any difference between the two. After reflecting on success, decide if you are willing to pay the price to get there.

The Scale of Values

Material values are not the way to go. A man’s goal ought to be (beyond the mere duty of making himself happy) to increase social well-being to confer the greatest benefits he can upon humanity. So long as fame and money are the ends sought, the benefits conferred upon humanity are mere by-products; whereas, in any civilization worthy of the name, the ends sought by individuals ought to be social well-being, and fame and money the by-products.

Tips for carrrying out resolutions:

The Omnipresence of Habit

Desires and fears are not the sole determinants of action; there is also habit. Habit is the doing of a thing without conscious attention and often without thought of the purpose of doing it.

The Alteration of Habit

When you first set about to abolish a bad habit and establish a good one, it is going to take all the effort, all the “will-power”, at your command. But habit begins soon to take the place of will-power; it will require less and less effort. You make your nervous system your ally instead of your enemy.

Will and The Psychoanalysts

This chapter focuses on discussing how psychoanalysts have it wrong. Points:

Discusses what to do with your will-power once you have it. Points:

A Program of Work

There are some tasks that we don’t even see as anything requiring will-power at all, simply because they do not come in the teeth-gritting class, but that we continue to put off anyways. The reasons for this are not being as efficient as we might be, and procrastination from lack of will-power.

Makes an example of a person who decides to devote evenings to the study of money and banking. They could learn it just as well at home as by going to night-school, but the rigidity of night-school means it requires less will-power. Another element is that it is much easier to say to a friend: “I’m sorry I’d like to go, but I have to go to night-school” then it is to say “I’m sorry but I have to stay home and study”. Your friend is likely to be skeptical. He may be unable to see than an obligation to yourself is quite as sacred as an obligation to others. But you have to commit anyways and stick to your self-study schedule. Note that it is much easier for the discipline of will-power to plan modestly and to carry out your schedule than to plan greatly and fail. The first builds self-confidence; the second destroys it.

Keep the faculty of effort alive in you by a little gratuitous exercise every day. Do every day or two something for no other reason than that you would rather not do it, so that when the hour of dire needs draws nigh, it may find you not unnerved and untrained to stand the test.

There is the practical example of asking for a raise. You know you are worth more money, but you don’t have the courage. A test of meeting the challenge is the way you feel at the end of the day. If you have met the challenge, you will be rewarded with a glow of soul; if you have evaded or postponed it, your lot will be a sense of guilt.

Emotion follows action, not the other way around. If you really mean to do it at all, insist upon fixing a definite deadline.

Another case is when you would like to give the answer “No”. Yet you fear to give offense; you fear friendship, you fear having to defend your position; you fear embarassment. A man cannot respect himself if he grants a request or gives money to a beggar not because he believes the request is fair, or to relieve the beggar’s distress, but simply because he cannot look his supplicant in the eye and tell him No.

There is always the infinitude of bad habits to be broken and good habits to be formed. One example is a cold shower every morning: it is an excellent will exercise, which more than pays for itself in its effects upon your health.

There are two main ways to get past this problem:

This can be a dangerous doctrine that would leave to overwork, overstrain and nervous breakdown. It is possible to overdo it; but for overwhelming majority it is not the slightest danger. Most breakdowns attributed to overwork do not come from overwork, but from worry, dissipation and unhygienic living. Indolence will always find excuses for its own existence.

Final notes before parting from the book:

Back | Home
Storyworthy by Matthew Dicks