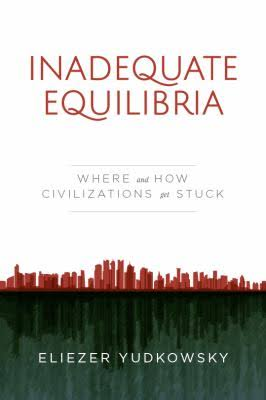 My rating: 9/10
An interesting book which explores the efficiency and adequacy of systems, and presents a case against modest empistemology in favor of probability theory and decision-theory.

My rating: 9/10
An interesting book which explores the efficiency and adequacy of systems, and presents a case against modest empistemology in favor of probability theory and decision-theory.

This book can be seen as having two themes that are interwoven with one another. The first is about exploring and assessing the efficiency and adequacy of systems, and the second is about rejecting modest epistemology in favor of other frameworks for setting your confidence in your beliefs. It exposes some of the forces which beget moloch and offers some wisdom for designing more adequate systems.

The core thesis of the first theme is that systems which have persistently undesirable outputs are typically either inexploitable or inadequate. Inexploitable systems behave poorly because those who are interested in making them run properly have no ability to capitalize on their knowledge. Inadequate systems behave poorly because they are set up to optimize for the wrong utility function.

The core thesis of the second theme is that you can and should use probability theory and decision theory to form your beliefs. Allow yourself high confidence in the result, but also master changing your mind when new data calls for it.

What I Got Out of It

I thoroughly enjoyed this book and would recommend it to anyone interested in human coordination. It gave me a much deeper appreciation for the role incentives play in determining the output of systems, and why broken systems are so hard to fix.

It can be easy to see systems as having some divineness to them for why they operate the way they do, but going forwards I’ll have a better understanding of the way that while systems may be efficient, it’s easy for them to end up as inadequate for some task.

The discussion of modest epistemology was interesting. Yudkowsky offers some tools for justifying having high confidence in your beliefs even when they appear to defy experts on a subject. The idea is that while it may be unreasonable to generate beliefs that defy experts in a field you aren’t an expert in, it’s much more reasonable to synthesize the beliefs of experts, update their relative likelihoods based on your experience and background, and hold high confidence in the conclusions of this process.

Updated on Nov, 15 2022
Back | Home
Storyworthy by Matthew Dicks The Sovereign Individual